To share your memory on the wall of Alvin Ortiz, sign in using one of the following options:

Alvin Ike studied fine arts at Roosevelt High School in Yonkers, NY. He was a great artist but as his muscles weakened, he could no longer exercise his artistic talent, which he enjoyed so much. He also studied computer technology for two years at Westchester Community College. His mother never studied computer, but Alvin Ike was his mother first computer teacher.

Since early childhood he suffered from Epilepsy, Juvenile diabetes at the age of 17, and later on at the age of 29 he began suffering with Multiple Sclerosis. Finally, the combination of all these maligned illnesses made his body extremely frail in the last years of his life.

Among Alvin Ike’s most precious gifts was his impeccable faith. He really had a special relationship and trust with the Lord throughout his difficult life journey. Every Sunday, he looked forward to get dress and go and go to church to praise the Lord. He loved to collect the offering on Sundays when it was his turn. He seemed a very quiet person, but he was not at all. Once he knew you well, he would dialogue in his unique way of expression, by joking. This was another special gift he would make a joke out of his own pain and suffering that no one else would imagine. He was never bitter because of all his illnesses. He never complained because he always said the time that I am going to spend complaining, I could be praying and thinking something positive will happen to me.

Alvin Ike was always willing to share his knowledge with others. He always shared words of wisdom with his mom and close friends. As the only child, he was consented and overly protected by his mom. At times he would say “mom you love me too much”. He was never selfish. He loved to share his belongings with his friends in school. Before going to school in the morning, he always asked for extra money just in case one his friends did not have enough money, he would buy lunch for them. He was the most amazing son, great human being and best friend anyone would desire. His favorite hobbies were: watching wrestling matches, Neflix and Hulu videos, going to the movies, and fine dining and junk food restaurants, but most of all listening to all his famous reggaetoneros were: Vico C, Tito el Bambino, Daddy Yankee, Don Omar, Hector el Father and Wisin and Yandel. Reggaeton was his favorite music. On his best days, he would spend a great deal of time just listening to his music. His favorite place was the beach.

At one time he was hospitalized in a rehab in New Rochelle, NY, while he had three surgeries in his left leg from an infection he had, and someone asked him, if God will take you out of this place walking again what would you do for the Lord? He answered: I would like to work with the church community to bring the youth people to Christ. He envisioned himself working with the church youth. This was a passion he had in his heart and was never accomplished because he was always ill after that.

Alvin Ike was a sincere, honest person who taught many of us long life lessons without a teaching degree.
Alvin Ike’s New Address: A Celestial Move/Una Mudanza Celestial

Alvin Ike you have just moved from Minerva Drive, Yonkers, N.Y. to your Celestial Home, your new permanent address. I hope to see you there one day. You will always occupy a special place in our hearts.
Read Less

Receive notifications about information and event scheduling for Alvin

Consider providing a gift of comfort for the family of Alvin Ortiz by sending flowers.

We encourage you to share your most beloved memories of Alvin here, so that the family and other loved ones can always see it. You can upload cherished photographs, or share your favorite stories, and can even comment on those shared by others. 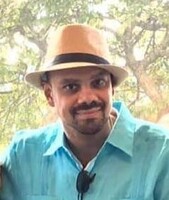