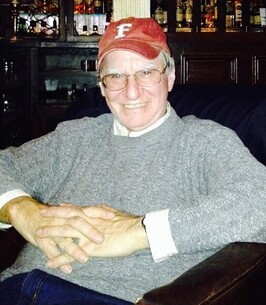 Andrew J. Konrad, of Yonkers, New York, and Sarasota, Florida, died on June 8, 2022, at the age of 77. He was born on October 4, 1944, in Brooklyn, New York, to Christina (Broderick) and Andrew Konrad. He attended St. Raymond’s grammar school in the Bronx where his love of basketball began. He graduated from Cardinal Hayes High School and earned a Bachelor’s degree in history from Fordham University and his Masters in history from New York University.

Andrew’s greatest passion was teaching. His first job was at Tolentine High School in the Bronx. He loved stretching minds to see what they could do! He was “Crazy Konrad” who coached basketball and talked about his prior and future trips to see the country. He made his students read and think, and this prepared them for college and life. Teaching was one of his greatest gifts.

He also taught at Sacred Heart High School in Yonkers and Cathedral High Schools for girls in Manhattan. Having his students at Cathedral win the Fed Challenge was another highlight in his lengthy teaching career.
Andrew was a planner from an early age, a habit that continued throughout his life. He planned outings four years in advance or scheduled day trips to see a show or a new museum exhibit. Family trips were a combination of fun and learning—seeing ballparks, national parks, amusement parks, museums, you name it. Over the years, he visited all 50 states and every Major League ballpark. He was a constant fan in the stands at the local college basketball games, especially his Fordham Rams. He shared his love of travel with his long-time friends – John, Mike, Pat, Luis, and Vinny C. He wanted everyone to broaden their experiences.
He married Jo-Anne (McCabe) in 1971. They had three wonderful children: Kim, Rob, and Kristi; two fantastic sons-in-law, Mike Halpin and Rich Hennessy; and four loving granddaughters, Kaitlyn and Annie Halpin and Megan and Erin Hennessy.

In retirement, he played racquetball with his buddies at the Y or met friends in Manhattan for lectures, concerts, museums, or pub crawling. His nephew, Andy, kept him on top of the current music trends by making homemade CDs, which Andrew then converted to cassette tapes and shared the CDs with his granddaughters. He was the only one who would buy CDs and make cassettes and there were hundreds of them!
When he became a snowbird, he talked to people in his development and told them about the things they could do or visit. He wanted everyone to go and “inhale” the environment and culture that surrounded them.
A failed back surgery, however, prevented the “energizer bunny” from doing the things he loved. A diagnosis of Alzheimer’s was followed by an additional diagnosis of Parkinson’s, but in spite of that, he held on to travel until the end. Now that he’s made his final trip, he is hopefully at peace and is the “Andy the K” that everyone remembers.

Besides, his immediate family, he leaves his brother, Peter and his wife, Louise eight nieces and nephews; ten grand-nieces and nephews; a great-grand-niece; and several cousins. He was predeceased by his parents, Andrew and Christina Konrad, his sister, Theresa Ruth, and other friends and family.

A celebration of life will be held on June 24th and 25th at Flynn Memorial Home, 1652 Central Park Avenue, Yonkers, NY, 10710 and Mass at Christ the King, 740 North Broadway, Yonkers, NY. . Interment will be at Gate of Heaven Cemetery.

In lieu of flowers, donations can be made to the Alzheimer’s Association (alz.org) or Neuro Challenge Foundation for Parkinson’s (neurochallenge.org), 722 Apex Rd. Suite A, Sarasota, FL, 34240.