To share your memory on the wall of Salvatore Malfa, sign in using one of the following options:

Sal was born in the Bronx to Frank and Domenica Malfa. He served in the US Army during 8 campaigns in World War II as a clerk in the 128th Evacuation Hospital. Afte... Read More
Salvatore A. Malfa, 105, of Yonkers NY passed away on April 24th, 2021.

Sal was born in the Bronx to Frank and Domenica Malfa. He served in the US Army during 8 campaigns in World War II as a clerk in the 128th Evacuation Hospital. After returning home Sal ran a local liquor store in the Bronx for 3 decades. He then worked for Leonard Kreusch as a salesman until 2017.

Sal is survived by his daughter Claudia and her husband Harold; his son-in-law Pasquale; his grandchildren Amanda, Andrea, Gregory, and Thomas; and his great grandchildren Joseph, Dominic, Jonathan, Aaden, and Adeline. He will be deeply missed by family, friends, and everyone who knew him.

Condolences for Sal may be left on his Memory Wall at flynnmemorialhome.com

Receive notifications about information and event scheduling for Salvatore

Consider providing a gift of comfort for the family of Salvatore Malfa by sending flowers.

We encourage you to share your most beloved memories of Salvatore here, so that the family and other loved ones can always see it. You can upload cherished photographs, or share your favorite stories, and can even comment on those shared by others.

Posted May 03, 2021 at 01:05pm
I have known Sal for almost 35 years, and there has never been a finer gentleman in our industry. He would share stories with me
about his life and always helped me remember that his was truly the greatest generation. I will deeply miss him, and he will
always be a legend here. Peter Landolt - Viscount Wines
Comment Share
Share via: 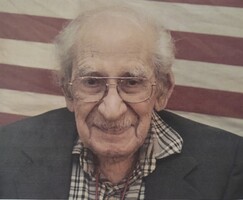