To share your memory on the wall of Louise P. Williams, sign in using one of the following options:

Provide comfort for the family by sending flowers or planting a tree in memory of Louise P. Williams

Provide comfort for the family by sending flowers or planting a tree in memory of Louise P. Williams

Lasting until her final days of lucidity, Louise’s keen sense of humor never waned; she could find a quip in almost anything, no matter how grim things were going. In the early 1960’s when the family moved to a relatively new post-war housing development on other side of town, Louise joined the “bridge club”. Comprised of housewives (sorry, that’s a “period” term) from all walks of life, the same group of ladies assembled regularly for over fifty years, (its unknown when bridge stopped being played, if it ever was). Every intimate phase of life’s experiences were shared by this group, of which only two survive, her sister Mena and neighbor Claire.

Louise had a great sense of style, which is a common remembrance in the condolences received from her family and friends . As an office administrator, she worked in a variety of places, including for Tom Carvel (growing up, flying saucers were often the desert of choice), EJ Korvettes, and Lawrence Hospital. She was known for her stylistic fashion choices and her quick wit. This was no small feat while raising five children and a husband with an inflexible work schedule. After retirement, Louise and Harry took over 20 cruises, usually going first class to the Caribbean on the finest ships of the Cunard Line. And who said a mid-century mom cannot be cool? She certainly was.

Over the last 2 plus years, Harry and Louise were cared for 24/7 by home health aids Victoria Obeng and Amma Dufie. They made their lives infinitely more comfortable to which we owe a debt of gratitude. Thank you Victoria and Amma!

Receive notifications about information and event scheduling for Louise P.

Consider providing a gift of comfort for the family of Louise P. Williams by sending flowers.

We encourage you to share your most beloved memories of Louise P. here, so that the family and other loved ones can always see it. You can upload cherished photographs, or share your favorite stories, and can even comment on those shared by others.

Posted Feb 02, 2021 at 09:11am
My siblings and I are so sorry to hear of Aunt Louise’s passing. We have fond memories of visiting Aunt Louise and Uncle Harry during Christmas and family get togethers in Yonkers. I loved hearing our grandma tell stories of them growing up and hearing about all the fights and happy memories they had as sisters which I could always relate to with my own little sister. We are sending love to the rest of the family during this difficult time.
Love,
Catie, Maria and Matteo Longhi
Comment Share
Share via:
CB

Posted Feb 01, 2021 at 02:28pm
My sincere Condolences to you all on the loss of your mom and grandmom (Nana...) I have fond memories of being with her and you on our family holiday get togethers and of course, "up at the beach". Yes, your mom was a quick wit as I recall when it came to life's ups and downs. She loved to laugh---even after Max had returned (one way or another) from bolting out of the house and into the water at the beach. I'm sure she is at peace now and out of pain, and happy to be reunited with her Beloved Harry, Petie, Nancy, Tulia, Tom and her many cousins who departed this earth before her. Love and hugs, Claire (Pecora).
Comment Share
Share via:

Posted Jan 31, 2021 at 07:03pm
Mom, I miss you. You used to call me Louise-ella (little Louise). You used to bring us ”Bella cosa” (little gift) all the time ranging from snowballs to jewelry. You bought me my first cat because I liked my friend’s cat. You were passionate about your animals and always took it upon yourself to take the burden of putting them to rest. You even wrote a touching, tear-inducing article on our first dog, Max for the paper. But don’t forget about your “poison pen” letters as you were no pushover! You fought for your family.
I remember, as a child, running down to get some goodies when the bridge club retired to the dining room. I remember how you adored your nurses at Lawrence. You used to tell us stories of Nonna, the Marquesa and Poppa and their love.
You talked to everyone wherever you went and had a kind soul, but a quick wit which we all share.
I hope you get to see your favorite girlfriend/cousin Francis where you are. You can giggle like schoolgirls again. I miss you and love you Mom.
Comment Share
Share via:

Posted Jan 31, 2021 at 06:37pm
Mom,
There are too many memories.
Yikes you made me feel better when I felt down.
Shopping at Caldor with your girls. Cooking lasagna together with daddy. Listening to you and talk debate the pie crust, gif the ricotta pie, as “too long” or “too short”.
I miss our phone calls. Always ending on a laugh.
Your style, your grace. Your poison pen letters!’
I’m sure you’re happy and healthy again now.
Big kisses for Daddy, Iris snd Willie!
I love you,
Tina
Comment Share
Share via: 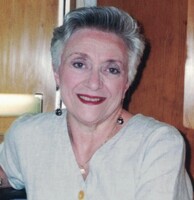